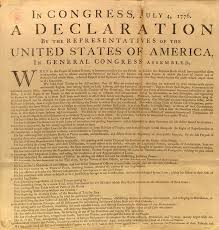 
"It is the duty of civil magistrates to protect the person and good name of all their people, in such an effectual manner as that no person be suffered, either upon pretense of religion or of infidelity, to offer any indignity, violence, abuse, or injury to any other person whatsoever: and to take order that all religious and ecclesiastical assemblies be held without molestation or disturbance."

The implication here is that the magistrate (the state) has no business meddling in the affairs of churches, and may not deprive the individual citizen of rights granted to him by God alone. More specifically, the state should be challenged and even disobeyed when it has overstepped its bounds. No magistrate is above the law and no citizen should be deprived of his natural (inalienable) rights.

This was not the thinking at the beginning of the Reformation a century earlier.  Emerging from medieval darkness in the mid 16th century, Reformers maintained the residual belief that the state (the King) holds the reins of authority by God's appointment, and that a citizen may claim no right except as through that appointment, whether of his property or his life, or in the case of England where the King was head of the Church, even of his eternal soul.

With respect to this question, the Reformation in the Church of England never progressed beyond the middle of the 16th century.  The "Divine Right of Kings" in the Articles of Religion (written initially in 1553) were never amended but were rather "established" by her monarchs. During the the next 100 years, the Reformers would learn many lessons from the persecution of their churches by the forces of the counter-Reformation, but the English queen (and kings) never allowed them to be incorporated into the fabric of the Church.  For all that we might claim the Book of Common Prayer to be the most valuable prize of the Reformation, which it is, it does not reflect the fact that the Reformation subsequently decided that man possesses inherent dignity and value which no king should be allowed to touch.

A century after the Westminster Assemblies, the implications of what the Reformation had learned were on display in America, and were made evident in both its Declaration and its Constitution. Men were declared to have certain inalienable rights on which the State has no claim; they are life, liberty and the pursuit of happiness (godly honor).

So what does a Reformed Christian that loves the Book of Common Prayer do when he comes to "Oh Lord, Save the Queen?"  I propose "Oh Lord, humble our nation." As the list of scandals and state depravities in both the USA and England keeps getting longer, such a prayer is most appropriate. Special prayers for the "Queen's majesty" are unBiblical, and prayers for the "everlasting joy and felicity of the President" or for the royal family, as opposed to any other individual or family are simply absurd. These royals, even those subject to election are owed no presumption of being on the Lord's side.  They are no more above the law than any citizen.  The authority of Christ alone may go unquestioned.